Do you miss playing the classic video games which used to keep you and your family entertained for days on end? This Nintendo Switch – Animal Crossing Bundle console is here to take you on a great trip down memory lane.

Originally, the standard Nintendo Switch was launched in March 2017, with the revised version debuting in July 2019. It is available with Neon Blue and Neon red, or gray Joy-Con controllers. For your information, it has a price $299.99 (£279.99). Usually, there never tend to be huge discounts on Switch consoles, even during big sales. However you are able to get it with a few dollars or pounds when it’s bundled with one or more games. For comparison, the Switch Lite costs $199.99 or £199.99. 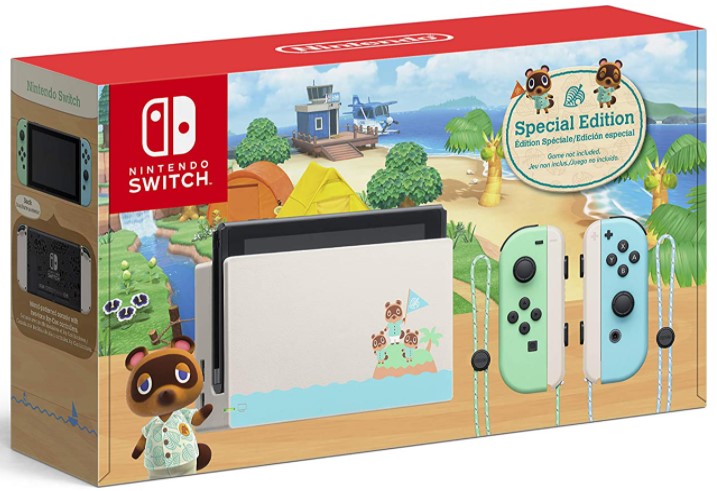 Whichever version you select, ensure that you find the best bundle at the best price where you are. Based on the research, a few months ago, there was a sudden spike in demand for the Nintendo Switch when people searched for a new hobby during lockdowns around the world.

Like most modern consoles, the Nintendo Switch has an unremarkable design: rectangles mixed with some softer curves, all rendered in matte plastics. You are able to select the Neon color option, whose blue and red Joy-Con controllers give it a little more personality, or the plainer all-gray version that gives a more cohesive look to the console. The center piece of the Switch is a gray rectangle with the display on it. Also, there is a space for the Nintendo Switch to move into, which is contains a USB Type-C connector, and a port for the AC adapter to attach. The side and back of the dock, it consist of three USB ports for plugging in accessories and an HDMI output to connect to your TV or monitor, covered by a molded flap to keep your cables tidy.

Mechanically, the Nintendo Switch is extremely smart. With the Joy-Cons attached to its side rails, the console functions like a large handheld. In alternative, you are able to slide the Joy-Cons off and utilize them in tabletop mode separately. Once you play this way, you are able to lay the Switch flat, or you are also able to prop it up on its built-in stand. There is TV mode, where the console plugs into the included dock to play your games on a separate display. This is the only method you will be able to play your games at their maximum 1080p resolution (in handheld mode, they default to 720p), however the console’s portability is really benefit.

The Nintendo Switch measures 4 x 9.4 x 0.55 inches or 10.1 x 23.8 x 1.3 centimeters. It’s weighs is 0.88 pounds (around 400 grams), creating it the smallest and lightest console. The display is a 720p LCD screen and it is also a touch screen. The Joy-Con controllers utilize rechargeable batteries, estimated to own a 20-hour life and to charge to full capacity in around 3.5 hours. You are able to power up the Joy-Cons by plugging them into the side rails in the main Switch console or into various specially designed accessories, most of which are sold separately. For your information, the system comes with a single Joy-Con holder, that approximates the look and feel of a traditional controller.

The Joy-Cons are as multipurpose as the console itself. You are able to use them together as two halves of a single gamepad. Or you are also able to turn them on their sides to utilize them as two separate controllers for local co-op and multiplayer gaming. You are going to find HD Rumble in the Joy-Cons for in-game feedback, accelerometer and a gyroscope for motion control in both Joy-Cons. But, in the right Joy-Con there is an additional IR sensor, that you are able to control certain games, and an NFC sensor for Nintendo’s Amiibo figurines. Those unlock extra content in specific titles.

The controllers are accompanied by some accessories. Those include the Joy-Con straps, that slide onto the sides of the controllers to provide you a more secure grip when you are using the motion controls, as well as more comfortable shoulder buttons if you are using single controllers. Also, there is the Joy-Con Grip. It will allow you to slide both controllers into a more familiar gamepad shape. This may be good for the players who are used to PlayStation or Xbox controllers.

If you want to play first-party Nintendo Switch games online (this includes the games like Super Smash Bros and Mario Kart 8 Deluxe), you have to back up your saves in the cloud, then play NES and SNES games, or access the companion Smartphone app, you will need to subscribe to Nintendo Switch Online. For your information, the Nintendo Switch Online has several peculiar characteristics. You do not need to pay for multiplayer for every game, however on the other hand, only certain games support cloud saves. Also, the Smartphone app is necessary for online voice chat, as the console itself cannot do this.

We get information that the prices for Nintendo Switch Online are $3.99 per month, $7.99 for three months and $19.99 for 12 months. If you want to utilize your Nintendo Switch only for local multiplayer, so you do not need to pay for membership. You are able to pair up to four Joy-Cons to a single Switch console, but you are also able to connect up to eight consoles together locally for massive multiplayer matches.

Games come as physical game cards or as downloaded games from the Nintendo eShop. If you want to download games, the Nintendo Switch has 32GB of internal storage, which is enough for a handful of games. However if you want a big library, you will need to use the microSDHC or microSDXC card slot, or rely on physical games, that take up less space on the Switch’s HDD.